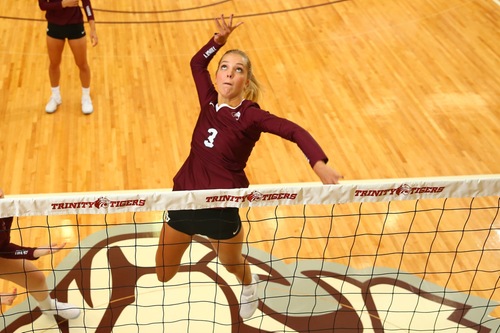 Trinity University will be holding its Trinity University Women’s Volleyball Elite Position Camp on July 10 – 12. The camp is open to all experienced lady players aging 14 to 18 who are looking to get to the next level. In addition, the Elite Position Camp is a program aims to advance the participants’ individual skills. Most importantly, the purpose is to refine their skills which are specific to their positions. Furthermore, the camp will include 6 vs 6 competitions to enable campers to apply the skills they learn. Competitive gameplay will also help in position training and boosts teamwork. Camp location is at the Bell Athletic Center, a comfortable training environment for the campers.

Trinity University founded 1869, is a private institution in San Antonio, Texas. It is a liberal arts college ranking first in the West according to the 2018 Regional University Rankings by the U.S. News and World Report. The university is consistently holding this position for an outstanding 26 consecutive years. Its campus which is 125 acres in size is in the Monte Vista Historic District. Currently, Trinity University’s undergraduate student enrollment totals 2,334. This undergraduate student population is with a gender distribution of 47 percent male and 53 percent female students. Additionally, the university’s student to faculty ratio is 9:1. Moreover, 59.7% of its classes have fewer than 20 students. The nickname of Trinity University sports teams is Trinity Tigers. In the 50s, the school mascot is an actual Bengal tiger named LeeRoy. The Trinity Tigers are participating in the NCAA’s Division III and the Southern Collegiate Athletic Conference.

Julie Jenkins is at the helm of the Lady Tigers Volleyball Team for 33 seasons as Head Coach. Her heading the program has enabled the team to garner more than 850 wins. To mention a few, the team was NCAA National Runner-Up once, NCAA Final Four twice and NCAA Quarterfinals five times. Moreover, Coach Jenkins was SCAC Coach of the year thirteen times, South Region Coach of the year for seven times and once a National Coach of the Year. Adding to the team’s impressive staff is Assistant Coach Aly Lilley.